​Las Vegas Raiders Stadium
The NCA government relations team successfully lobbied to amend the Las Vegas stadium legislation to address challenges related to small business contracting requirements. This was one of only a handful of amendments accepted by the legislature. Further, the team’s diligent work paid off when Assembly Majority Leader, Paul Anderson, called on NCA Chief Executive Officer, Sean Stewart, to address the committee of the whole (comprised of both the Assembly and the Senate, meeting as one body) in regards to construction elements of the stadium, including workforce challenges and the ability of local firms to take on the project. The legislation passed during a special session in 2016, paving the way for the Las Vegas Raiders to take the field in 2020.


General Contractor Liability under Nevada Revised Statutes 608.150
The NCA government relations team passed legislation in 2015 and again in 2017 to limit the general contractor’s liability when a subcontractor fails to pay an employee’s fringe benefits. Prior to successful passage of this legislation, general contractors could be held liable for a subcontractors failed fringe benefit payments for up to three or four years from when payment was due – often even after a project had closed, and after funds for these wages and benefits had already been paid to the subcontractor. Passage of this legislation reduced the general’s liability to two years and also includes measures to ensure that the general contractor can seek an accounting of any delinquent payments with enough time to take measures to address it. Asking for and receiving an “all clear” release can cut off the general’s liability from the date of the release, generating much needed predictability in managing your projects.


Clark County Fuel Tax Indexing
The NCA government relations team successfully lobbied in 2013 and again in 2015 to pass legislation requiring taxes on fuel sold in Clark County to be indexed to inflation. The revenue from fuel tax indexing has allowed the Regional Transportation Commission of Southern Nevada to fund billions of dollars in road construction, creating critically needed jobs and stimulating the economy.


Prevailing Wage
The NCA has worked consistently at each legislative session to ensure reasonable labor policies in Nevada that encourage the use of local construction workers and competitive wages. NCA has been a leader and a consistent and reasonable industry voice on this topic for many years and will continue to be that essential voice in the regulatory and statutory process.


Construction Manager at Risk (CMAR)
The NCA government relations team successfully lobbied in 2013 and again in 2017 to ensure that state agencies have the ability to build projects using the CMAR delivery method, while putting checks in place intended to bring fairness to the selection process and even out the playing field.


Apprentice Hours
In 2017 and 2019, the Legislature threatened to require apprentice hours of up to 15% on public works construction projects. NCA lobbied successfully for more reasonable and attainable requirements. Legislation passed in 2019 setting apprentice requirements at 10% (vertical) and 3% (horizontal). NCA remained opposed the final version of the bill and continues to work with the labor commissioner and Legislature on this issue.


Highway Construction
In 2019, NDOT requested a bill that would have established a 5% retention on highway projects in lieu of the current $50,000. NCA opposed this change, and working with NDOT and other stakeholders, the proposed 5% was cut in half to 2.5%.

Thank you to our PAC Donors! 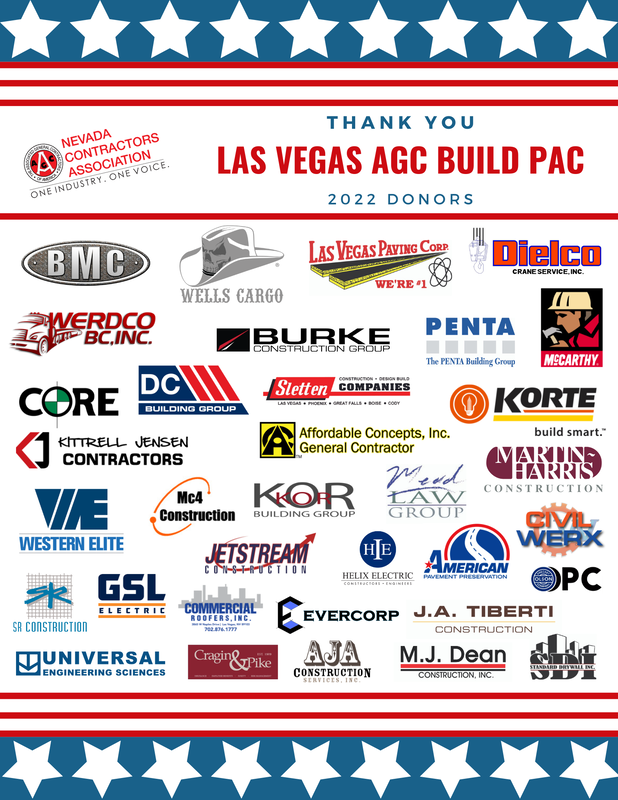